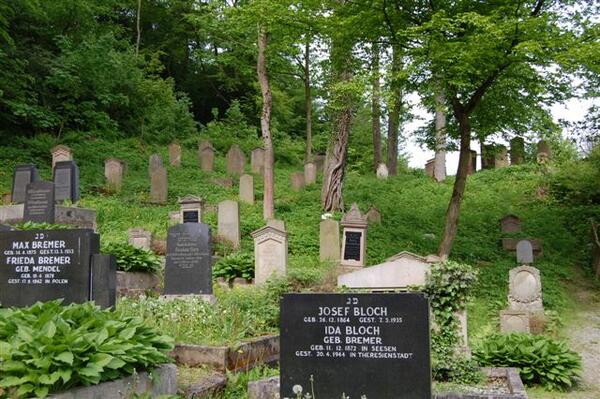 Jüdischer Friedhof
Circular walk 6 starts in the car park In der Dehne. From here you go up the Forststraße to the Dehneplatz. Keep sharp right and then proceed your walk over the Lauseberg (324m) direction Hasseberg (281m). Behind the water reservoir you can head left on the next junction, back to the Dehneplatz and over Dehnestraße again to the car park.

If you like to see more of Seesen after the approximately 1-hour walk, we recommend a walk to the Jewish cemetery in the Dehnestrasse. Israel Jacobson (founder of the Jacobson School) bought the location in Lauseberg in 1805 for the growing Jewish population. However, the first interment was not until 1836, the last was in 1936. The hilltop on the cemetery was intended for the officials of the Jacobson School, so they could ‘overlook the school’. Israel Jacobson himself was buried on the Christian cemetery in Berlin. One only finds the graves of his sons Meier and Herrmann (founder of the former orphanage) here. Also in the Dehnestrasse, one can see the ‘Seesener quadriga’ on top of one of the Züchner villas. The just 5 metre high sculpture was made in the Wilhelmshütt in Bornum for the world exhibition in Chicago. It is a design of the Dresden sculptor Ernst Rietschel and served as a model for the Berlin quadriga damaged during the war. However, different sources do not agree here. Before the First World War, Fritz Züchner acquired the quadriga with the intention to donate it to the town of Seesen. The quadriga was supposed to decorate a new town hall, but up to now it is still in possession of the family.