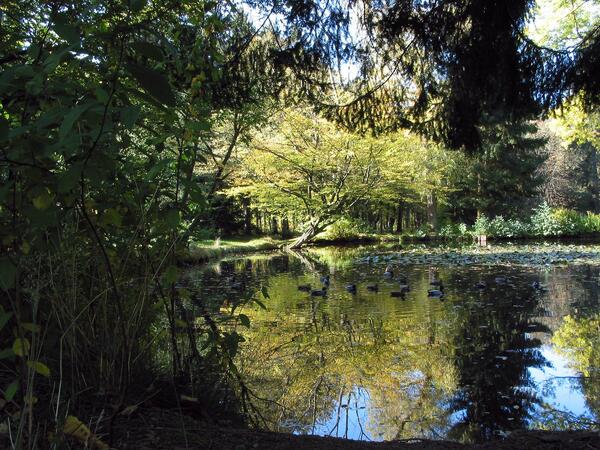 From the car park in der Dehne (entrance in front of restaurant China Garden) the path goes left, uphill through the forest up to the Forellenstieg. Here the Schildau flows which has its source in the Hahnental and flows near Rhüden into the Nette. After crossing the bridge and the Lautenthaler Straße you reach the wonderful Steinway-Kurpark with its five ponds. The park was built in 1892 and donated by William Steinway, son of the famous piano-maker's family Steinweg. To honour him there is a memorial stone. Also the author Wilhelm Raabe (1831-1910) has a memorial stone in this park. Apart from the concert ‘mussel’ and the ‘Vogelwecker‘ (‘bird's alarm clock’, produces the sounds of all bird species living in the park) numerous seats seduce you to stay a bit longer. Besides, the park has an extensive stock of trees with 58 different species, some more than 100 years old. For the little hiking friends the large playground offers even more possibilities for letting yourself go. And with the fitness course also ‘sportsmen’ get their share.

Before you return to the car park you pass a barrage. In earlier times its purpose was to supply the whole town with water for extinguishing fires. From the car park In der Dehne a slight detour to the Jewish cemetery in Dehnestrasse is possible. In 1805 Israel Jacobson bought this location in Lauseberg for the growing Jewish population. However, the first interment did not take place before 1836, the last one was in 1936. Also in the Dehnestrasse one can see the ‘Seesen Quadriga’ on one of the Züchner villas. The just 5 metre high sculpture was made in 1893 for the world exhibition in Chicago.