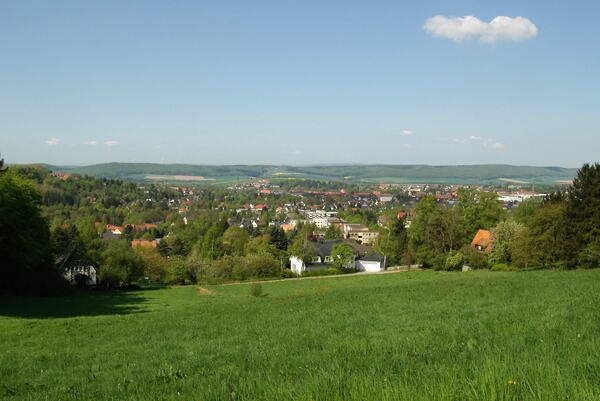 Circular walk 1 begins in the Granetal. Start going up the Granestrasse and after 300 m turn left into the Oberförster- Hinze-Weg up to the Wilhelmshöhe. Here the former Cafe Hölscher stands, a once popular destination. From this hill one has a magnificent view on Seesen and the Harz foothills.

Keep right and then reach the Herzog-Wilhelm-Schneise. From the Sandbrink the path leads to the Hohe-Stein-Straße. Here stands one of the sequoias, planted in 1975. Proceed until the Förster-Bauer-Weg begins on your right. Follow this road and the ‘Alten Landesgrenze’ further up to the ‘Kalten Birke’. The area around the ‘Kalten Birke’ was a gift from Emperor Otto II (955-983) to the abbess of Gandersheim. However, the area was for the first time mentioned in a charter from 1350 with the name "an de Koldenberken". In earlier times a forest farm stood on this spot, today there is a mountain shelter with Harz hiking-pin stamp point No. 103.

From the ‘Kalten Birke’ the way finally leads you along the Schieferweg back in the Granetal, whilst passing by ‘Walter Kolle Köte’. Walter Kolle was one of the initiators of the Harz Club Seesen and an honorary member. A ‘Köte’ served the charcoal burners as a shelter. Finally, after about 3 hours, you return to the car park again.