Today the Jacobsonplatz is a meeting place for the whole town. Markets, concerts and festivals are organised here.

The bronze sculpture "Scuffling Boys" of the Osnabrück sculptor Gerd Ruwe reminds of the fact that this place was a former school yard of the Jacobson School. In the former boarding-school building of the school, the today's municipal hall, an exhibition honours the achievements of its founder Israel Jacobson. The school’s foundation in 1801 falls in an era of turmoil in which the equalization of all citizens, the Jews included, was demanded.

During the following years Israel Jacobson tried to improve education with his equally accessible institution and tried to fulfil Napoleons laws, which gave Jews the same rights as Christians. 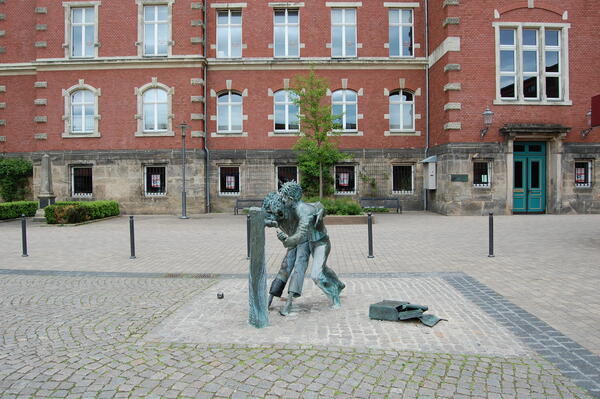 The school began in 1801, but already in 1808 the school building had to be enlarged. After the state recognised the Jacobson as an official secondary school the number of students increased in such a way that new buildings became necessary. An inscription above the main entrance of the synagogue reminds of Jacobsons understanding of the Christian-Jewish situation: "Do we not have all one father? Did God not created us?"

In the evening of the 9th of November 1938 the synagogue was destroyed by arson. In 1972 the school moved in the new-built school in the St.-Annen-Straße. The remaining school buildings were pulled down in 1975, except the boarding-school building.

Nowadays the council meetings take place here. Among others, Seesen associations, the town library and the city marketing company are located in the municipal hall.